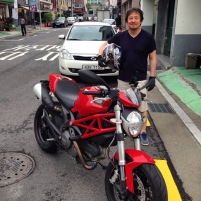 SangKwon Goo is a product designer, 3D CG designer and 3D printing expert. He became fascinated with 3D computer graphics while studying product design at Seoul National University. Afterwards, Goo further studied various 3D graphics and has applied his skills and knowledge to various fields such as automobile, product design, commercial film, game, broadcasting, etc. Especially, 3D modeling is his area of expertise and he is able to create high quality models. Also, Goo has been teaching students in universities with the plenty of field experiences. Based on the teaching experiences, he developed new 3D CG education methodologies adopted from mathematics and science education.

Currently, Goo serves as the CEO of FAB365 which provides 3D printing services including 3D design. He has been developing new design styles customized for additive manufacturing. In addition, he aims to establish a new infrastructure for a product designer using 3D printing technologies to earn an appropriate profit.

This is a text widget. The Text Widget allows you to add text or HTML to your sidebar. You can use a text widget to display text, links, images, HTML, or a combination of these. Edit them in the Widget section of the Customizer.